Between the end and where we lie

On new music from old favorites

A very cool thing showed up on the internet today: 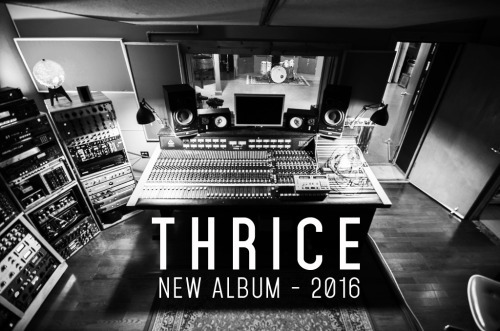 So naturally I screamed a little in my office and now everyone's wondering if I'm okay, and I'm sitting here thinking about what it means to be able to feel excitement like I feel now about a band that hasn't released music for the last five years. What is it about this band and how is that I've never been able to stop anticipating this announcement, even when in 2012 it seemed like it might never come?

I think it's because I feel like Thrice and I have grown together. When I was twelve, in 2003 - the best year in all of music, or maybe just the year I learned to find my way around a record store - I used to put The Artist in the Ambulance in my CD player and walk in circles around the lake by our house while it played. There were a few songs I always played on repeat - "Silhouette" comes to mind - and a few I always skipped (the two tracks after "Stare at the Sun"). This record still feels like home to me, because I remember how it sat in between Stay What You Are and the Coheed album with the long name (oh, oops, is that all of them?) in a stack that came with me everywhere we went. When my mom would get annoyed listening to Thrice playing in her car, I'd tell her the lyrics were about the bible. (They really were.)

When I was in college, I stopped paying attention to music for a while. I don't love to look back on how all of my favorite bands took a backseat to whatever played on the radio in our cars and in clubs near campus for a few years. But somehow I do remember listening to Vheissu while I worked out at the gym. One of the kids that hung around with my college friends became one of my best friends because of a conversation that started over Thrice (and continued over years of texting lyrics, and meeting up in different cities for shows, and pretending not to take each other's music recommendations seriously until they turn into our new favorite bands). And the last time I fell in love, "Anthology" was there to remind me how to have someone's back again.

Dustin Kensrue was once quoted as saying, "My brain naturally wants to write essays and call them songs." Don't you wish your brain worked like that? At best, my brain wants to talk to itself in tweets and call them essays. As I'm starting to think about my EOTY lists for 2015, I know in one month I'll have to pick a favorite album from this year, and I have no clue what it will be. My 2016 year-end #1 pick, on the other hand? It's already set. Of course, I don't know yet if Dustin's essays will become the "best" collection of songs released next year. But there's no shadow of doubt that it will be my album of the year. Thrice has been grown-up now for a few years, at least since Major/Minor, with all its technicality and ambition. Last week, I turned 25, and with my little house and my little family, I'm starting to feel that way too. Whatever Thrice throws at us now, I'm ready for it.

Graduate student taking a break from grants and manuscripts to wax poetic on music.